I began this project by finding a Pew Internet data set that revealed the way people use social media and peer to peer exchange to find medical information. I was startled to see the low percentages, given the knowledge I had of the general population’s use of internet and social media. I wanted to play with the various ways to represent a very simple data set – only a few percentages. This ultimately proved both insightful and limiting.

I quickly realized that the juxtaposition of the medical versus the general use of online reviews was where the percentages were going to have the most powerful impact. I began with a bar graph that showed both general and medical uses. Percentage is generally best reflected as a pie chart, but I felt that the difference in height here was very quantifiable, and so the bar graph made it into the final four visualizations.

The second visualization is indeed a pie chart. I remembered what Tufte had said about only using the powerful colors for the smaller areas, so I used a muted green for the larger area of the first graph, and the powerful green for the smaller. However, I wanted to keep the colors consistent across the graphs, and so the color to area ratio was reversed for the second. And I agree with Tufte, having the stronger color for the larger area is less pleasant and meaningful. However, by keeping the colors consistent, it is immediately apparent that the percentages are almost reversed for medical vs general use. The discomfort of the large quantity of strong color helps this point hit home. 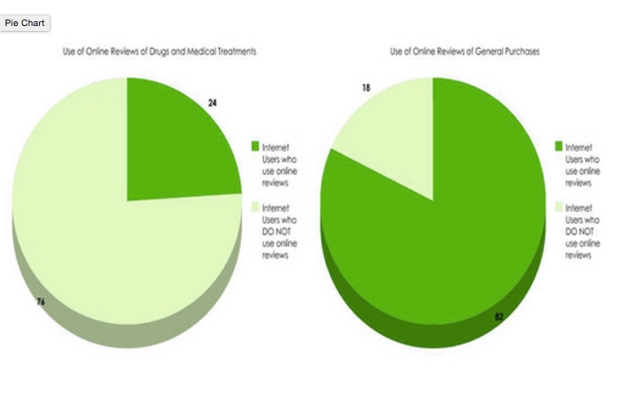 I really like the idea behind this third visualization. The 1 out of 5 stars immediately recalls the standard online rating system – stars. In this way, the method of visualization is much more closely tied to the information than in the other visualizations. Also, because the star system is generally used to show quality, not quantity as it is here, it indirectly hints the ultimate conclusion: that those who don’t look for the best health care treatments won’t ultimately get the best care. It is true that most patients trust their doctor’s advice for their treatment, but in today’s society where there are so many options for treatment, and such drastic consequences for doctors who deviate from the established MO, it may serve a patient well to do a bit of research on their own.

This was the visualization I was most excited about. Sometimes, we get lost in statistics and percentages, and forget that each of these represent real people. These two images capture the implications between the disparity between the numbers. 51% of shoppers review products online before making their in store purchases. Only 15% of patients review medical providers or facilities before making an appointment. How can we take the time to review which laundry detergent or TV is best, but not which doctor or clinic provides the best care? It allows the viewer to make greater connections. When we only get statistics – percentage of users who review “general products” (what are those anyway?) – we sometimes just glance over them. But by seeing the grocery store line and the waiting room, we begin to realize the huge difference between the importance of the two types of products, and the craziness of only paying attention to the arguably less important things. I think by bringing real world people and situations into the visualization with the statistics, we relate to it better. Also, by seeing a real world example, we carry it with us. Next time you’re in a clinic, will you think of this, look around and realize that only three of the people in that room know this is the best clinic for them? Or will you be sure to be one of them?

Even the colors and pictures say something. The shoppers’ picture is much brighter, more pleasing color wise. The waiting room picture is dreary and a bit depressing, which the statistic accompanying it is. These differences again provide a way of showing the disparity between the two, in a different, less quantifiable way. One limit to this visualization, however, is that it assumes that all members pictured are internet users. Only 75% of adults use the internet. Thus, the statistics shown in this visualization are more for visual/poster effect, as they haven’t been adjusted for the 25% who may be pictured who don’t use the internet.